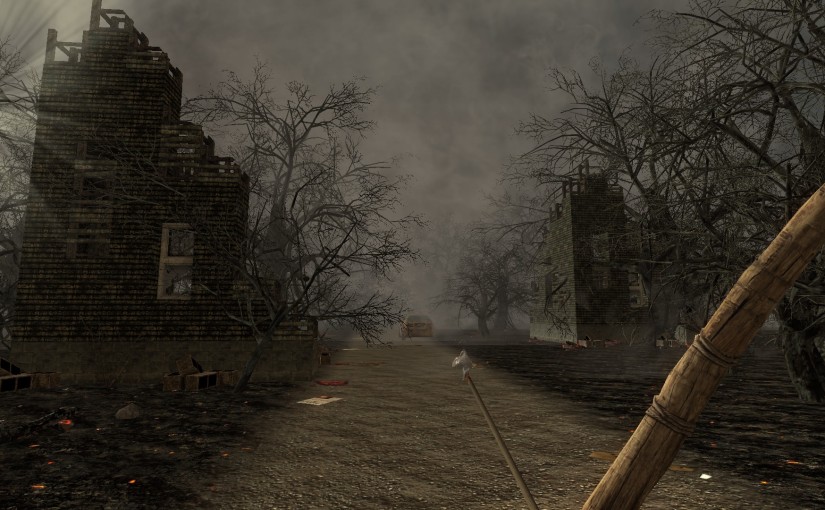 Last Desperate Stand chronicles the life of a man living in a post apocalyptic world. The story of H.M. Wells is told through a series of journal entries set in the universe of 7 Days to Die. Click here to start from the beginning.

The morning after Kevin became infected I was up at dawn. I woke Kevin, we cleaned and re-bandaged the bite and then made a game plan. There is nothing but snow in the north and the land to the east is too irradiated to travel into. So that leaves the south and west. We decided to split up and cover both directions. There is only one goal: Antibiotics. Nothing else matters. If you told me three years ago that people would kill over antibiotics, well I would have called you liar. But in the past few months, I’d have been proven wrong dozens of times, hundreds maybe.

Directly south of camp is a dead area I call the burnt forest. The area itself is a desolate wasteland, but just south of that is an old desert town. That area was a ghost town before the dead began to rise. But maybe if it hasn’t been raided, there might be some medicine. To the west, there is a large town and a ton of buildings. More buildings, more bastards, greater risk, but better odds. I told Kevin that I would go south. I want to help him, but he is the one with the sickness in his blood, not me. I will stick my neck out, but only so far.

When it’s time to pack a bag and hit the road, you should get your essentials first. Water. That’s obvious. Food. Anything that doesn’t smell is fine to carry, but make it worth it. No sense in hauling ten ears of corn around all day. A man could eat his weight in corn and still come back for more. There’s just no nutrition there. Eggs are great for the road. Not raw, that would be a mess. Hard boil a few then wrap em up in something soft and you’ll be set for an overnight hike. Weapons … there are never enough.

I could bring 200 arrows along, each arrow means another dropped bastard. Still, there would be more to kill, well kill again I guess. So what do you do if you can’t kill them all, cry off? Kind of. There is no shame in turning tail these days. I’m not too proud. I can stand and fight and die like the rest; or maybe I just slip into the shadows and quietly sneak among the dead. This is not a perfect science, you have to be ready to adapt. Some of those mindless shits will wander right by, but others can feel your warmth it seems. Once they’ve sensed you it’s as if they’ve somehow locked on. At that point there is no turning back. Those are the ones that must be put down.

The burnt forest is less than a mile wide. The land is barren, but that doesn’t mean you are alone. Disgusting ex-humans stumble about the place in the day time. I’ve never spent the night in the burnt forest and don’t plan on it anytime soon. I was around to see the area before it was a charred death trap. I know that it was our own military that scorched the land, some desperate attempt at containing the infection. It didn’t work. Instead it spawned these flaming mutations, the stuff of nightmares.

I made my way through the smoldering ruins, due south towards the desert. It was uneventful, but I felt exhausted. Probably because I held my breath the whole time. The smell is like a mix of burnt wood and hot dogs like some sort of psychotic barbecue. The aroma brings with it a wave of nausea that I can never shake until I get out of there.

It wasn’t long before the edge of the desert and it was still early when I reached a hill outside of the small town. Despite my morning arrival, scavenging a town this loaded with bastards can be time-consuming. I knew I wouldn’t be leaving today.

I picked off a few of the bastards outside of the town’s border, but to take them all on headfirst would be madness. Instead, whenever I clear a town, I gather the attention of small groups and “pied piper” the freaks out of the area. Once we’re a few hundred feet outside of town, I double back around and grab another group. After a few trips, a single survivor can usually clear out 90 percent or so of the town’s dead inhabitants. At that point, it’s just a matter of dropping the remaining stragglers.

I searched every building in town.

There were plenty of useful supplies laying around, duct tape, scrap metal, old books. But I found no antibiotics.

Running out of daylight, I took up camp on the roof of an old church. I will spend the night up here and head for home in the morning empty-handed. Hopefully, for Kevin’s sake, he had better luck than I did.

As I was raiding the town I couldn’t shake a feeling of unease. How is it that I could be in so deep as to be out here alone? I really don’t know who Kevin is, or even just what to expect when I get back. Maybe he waited for me to leave and then took everything of value and split. No, I can’t think that way. If we are ever to rebuild a sliver of what we lost, we will have to work together. Some say sympathy is a kin to naivety, but I believe it’s more a way of leading by example. I guess history will write itself, I’ll just keep fighting the good fight.
-H.M.