Last Desperate Stand chronicles the life of a man living in a post apocalyptic world. The story of H.M. Wells is told through a series of journal entries set in the universe of 7 Days to Die. Click here to start from the beginning.

I don’t know what I was thinking. I was never really a team player and the last time I tried to be a part of one, they all ended up dead. In fact, I always felt like a partner was more liable to get me killed than to get my back. Sure it’s stereotypical, a grumpy old codger who don’t trust no one but himself. But, if the shoe fits…

I guess I am lonely is all it really boils down to. I spend every day hiding in shadows and every night cowering from the terrible noises. Hell, are they terrible.

I was right about the man. He’s as inexperienced of a survivalist as one could imagine. No doubt he was a suit and tie kind of guy in his past life. Kevin, that’s his name, or that’s the name he gave to me. He is a clever man, I’ll give him that, but he takes too many risks and leaves too much to chance. I found the coals of his fire still warm from the night before. He’s burning wood the entire night and sleeping fifty yards to the east in a hole beneath a boulder, like a rodent.

The thought being, the fire will attract the bastards, meanwhile Kevin lays in a ready-made grave right under their noses. It’s a decent concept on paper, until the day one of the crawling fuckers wanders a little too close to the rock and notices the reflection of the moon in his unblinking eyes.

He has a small stash box hidden in the stump of a dead tree about 30 yards from his campfire. The only hiding spot more obvious would have been to put it beneath his damn pillow, that is, if he had one. I wasn’t surprised to find him firing a pistol out in the open. He was chasing after a wild boar and was doing a damn fine job at wasting ammo. Also, a damn fine job of attracting attention.

The bastards don’t move fast in the daytime, but that doesn’t mean they can’t get the jump on you if you aren’t paying attention. I watched the man struggle with the pig for several minutes before I noticed the crawler inching his way up to him in the tall grass. If I didn’t do something, the man would have taken taken a bite in the ankles. So, I stepped in. That was my second mistake.

All Kevin heard was the sound of my arrow penetrating the back of the dead thing’s skull. That was enough to get his attention away from the boar. After the kill I made my introduction, and he was gracious enough not to level his pistol in my direction, what with me saving his life and all. Still, I could see a look of desperation in his eyes. I had seen that look before and I’m certain I’ve had that look in my own eyes for that matter. A blankness; more like a body drained of emotion than a human being. I found myself in the presence of a man on the brink of sanity. He was frail, definitely starving, and for some reason I felt obligated to help him catch that damn boar. So after checking the pockets of the lifeless corpse on the ground between us, I led him on the trail of the damned beast.

We didn’t talk much as I tracked the pig. I walked and he followed. If I stopped to check for footprints, he would hunker down beside me. I was starting to think I could get used to that kind of companion. The trail was turning cold as we approached a run down gas station.

I hadn’t yet been out that far north and I’ll admit, curiosity got the best of me. So we slipped into the dilapidated building and began to rummage about. All I found was a couple of cans of chili from God knows when and a gas can, which may still prove to be helpful. Kevin heard them first, a wandering horde of a about a dozen bastards somehow managed to get the jump on us.

The horde wasn’t out to get us specifically, until Kevin freaked out. I can’t blame him, given the circumstances, but if he had just sat still they may have just meandered on by. He pointed his pistol and before I could stop him, he started to shoot. In a flash I was up and out the far south door shouting after him to follow. He did, but they were on the building in an instant. I had never seen some of these mutants before, must have had variations due to the cold weather. 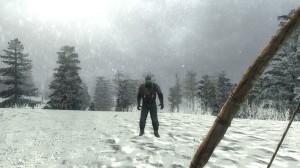 All these freaks and it was a dog that bit him. The fucking dogs. I put an arrow into it’s neck as the dog’s jaw was still clamped down on Kevin’s leg. The man weaseled out of the south window, I still don’t know how he managed to slip out. I kept the mindless monsters at bay with a few head shots as the two of us hobbled down the road back to the rooftop hideout. We never did get that pig.

Now we’re back at camp and I gave him some of the vegetables from the garden to fill the hole in his stomach as I patched his leg up with a makeshift cloth bandage to stop the bleeding. Kevin may be a rookie, but I’m not and I know what I’m looking at here. I’ve seen this a few too many times. It’s the way his leg is shaking, the way he can’t make eye contact, those are telltale signs that Kevin has the infection. The infection spreads rather slowly, but it never varies. First, it’s the shakes, then the fatigue, followed by emptiness and distracted behavior. Soon he will be a shell of a man, and then he will get the hunger. So at this point I have seven days to find some antibiotics or else, I will kill him in his sleep before he has a chance to turn.