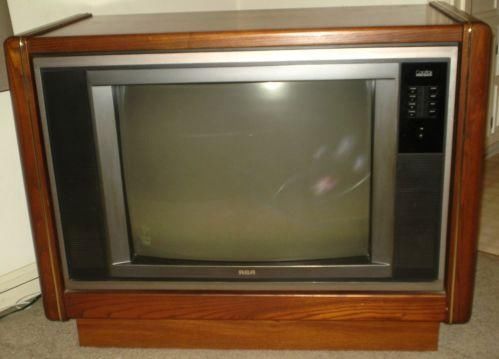 This was it. This was the escape hatch for my entire childhood: An RCA Colortrak Woodgrain Console television, circa 1990 (model shown). Many colors were tracked on its screen. The bright green of the Ninja Turtles as they ass-kicked Rocksteady and Bebop into oblivion. The electric blue of Sonic the Hedgehog, shooting through loops at lightning speed. The red blood and gore of Mortal Kombat after entering the blood code. The muted and rustic palette of that infamous, zombie-infested mansion. The dreamy gray of Liberty City.

Generations of video game consoles came and went. They were all beloved: That shiny, new toy you got for a special occasion, that prized possession. Sometimes, you just stared at it before even plugging it in, investigating the console’s construction, poking at the cartridge doors, pressing the power and reset buttons, trying to find any kind of trap door that might hint at a future expansion. Video game consoles were better than ordinary toys. They were the holy grail of Christmas presents.

My brother and I were lucky enough to own most major consoles from the NES onward. We acquired these treasured machines by means of Christmas gifts, or eventually, by saving our own money to buy them. The following systems were, at some point, hooked up to that old dinosaur TV:

Hundreds of games were played on this majestic, wooden set. Even as a kid, I would spend hours adjusting the Tint, Color, and Sharpness to get the picture looking just right.

That beautiful mahogany bastard above is a major player in a particular gaming memory that struck me recently. It was the summer of 2003, and I was a junior in college. I took summer classes in the city and my parents lived in the suburbs, so I commuted every day. I’d had an Xbox for a few years and was in love with it. I loved the better-than-PS2 graphics, the S-controller, the hard drive, everything about it. That summer, I loved the fact that the Xbox was the first place (and only place, at the time) I could play Bioware’s long-awaited Knights of the Old Republic. I’ve always loved Star Wars. The prospect of a full-on Star Wars RPG with an innovative new dialog mechanic, D&D combat mechanics, and an original story set 4000 years before the original trilogy totally freaked me out. I couldn’t wait.

I bought the shit out of KOTOR the day it came out. By then, my parents had bought a newer CRT which they used upstairs in the living room. The old console RCA set now lived in the basement, where my room was. For reasons I can’t recall, I thought it would be a good idea to literally drag the TV set into my room and wedge it between my bed and dresser. I suppose I thought my experience with KOTOR would be more intimate this way. It might have worked; I still have rich memories of my time playing the game. The adrenaline rush when I first booted it up, to the rolling text and theme music. I’ll never forget Taris, the first city. I remember thinking, “Holy shit, this is like Omikron but in the Star Wars universe!” This ended up not really being the case outside of some graphical similarities. By the way, Omikron was the shit.

I distinctly remember the Manaan trial, the long stretch on Tattooine with the Sand People, and the insane final battles. Taking my time on each planet to experience everything it had to offer, taking in the awesome world Bioware built. I remember learning to be a Jedi and building bonds with my crew mates. I fought hard to walk the neutral moral line with my actions and words. I mostly succeeded, but by the end of the game, I’d wished I would have gone full-on light side. This was an epic game, with fun, tactical combat, and a thick Star Wars sauce all over it. KOTOR is one of my all-time favorite RPG’s.

I’m replaying Knights of the Old Republic now on iPhone. It’s an interesting experience. Historically, I’ve resented games on iOS that try to make a traditional control scheme work with touch controls; it just never works. Surprisingly, KOTOR seems fine. The game doesn’t demand super-precise movement, so the way the character controls through the touchscreen works well. It can be a bit troublesome at times to make out some of the info on the screen, but overall it seems like a fantastic port by Aspyr. I love that I can relive the experience on my commute to work every day. The game still holds up. I might go dark side this time…

Check out this rumor about a potential HD remake of KOTOR coming next year:

One thought on “Days of Old – Knights of the Old Republic”